Conclusion: Serum Hcy elevation may be used as a laboratory assistant diagnostic index for cognitive dysfunction severity in first-episode schizophrenics.

Schizophrenia is a highly recurrent, severely disabling severe chronic mental illness. It brings serious mental and economic burdens to the sufferer’s family and negatively impacts society in ways that cannot be overderestimated [1]. Apart from any positive or negative symptoms, schizophrenia patients have significant cognitive disorders and dysfunctions. Currently, the cognitive disorder is recognized clinically as one of the core symptoms of schizophrenics. Schizophrenia pathogenesis and development mechanisms are, as yet, not fully clear. Some studies suggest that schizophrenia pathogenesis may be associated with, among others, DNA methylation changes, mitochondrial dysfunction, glutamate neurotransmitter disorders, and folic acid reduction.

Serum homocysteine (Hcy) is an intermediate which contains quinine amino acid produced after methionine demethylation in the methionine cycle. Clinical trials show that Hcy participates in in-vivo methylation reactions of important substances such as norepinephrine (NE), proteins, and DNA [2-3]. The studies found that schrizophrenic’s Hcy levels are significantly increased. Hcy elevates neuronal apoptosis to toxic levels. Abnormal Hcy metabolism may cause DNA methylation abnormalities. It has been speculated that Hcy abnormality is a risk factor for the schizophrenia pathogenesis and morbidity and that schizophrenics’ cognitive disorders may be associated with Hcy level increases [4]. Most of schizophrenic subjects in this study had a longer course of disease and their medication history treatment is unclear. Studies on FESP are relatively rare. This paper analyzes the relationships between serum Hcy levels and FESP cognitive functions in order further understand the role of serum Hcy in the schizophrenia pathogenesis.

Exclusion criteria: Patients with: severe organ injuries; mental retardation; a history of epilepsy, diabetes or other endocrine and metabolic disorders; a history of tobacco, alcohol, or other psychoactive substance abuse; and, pregnant or lactating women were excluded. There were 71 males and 41 female subjects in the SG. Their PANSS scores ranged from 63 to 98 points, with an average score of 78.6 ± 10.3. Their disease duration ranged from 1 to 15 months, with an average disease duration of 6.9 ± 2.7 months. No patients received antipsychotic medications before testing. Other information appears in Table 1. There was no significant difference in general clinical information between the two groups and an inter-group comparison was made (p > 0.05).

In the early morning 4 ml of fasting venous blood was taken and divided into 2 ml for each. A heparin anticoagulant was added and the blood was centrifuged for 10 min at 3000 r/min. The serum was immediately separated and refrigerated at -20 ℃ for later testing. One serum sample was used to determine Hcy level. The Siemens BNII specific protein analyzer and a tHcy detection kit were used to determine Hcy levels using immuno-scatter turbidmetry (ISTM) in accordance with manufacturer operating instructions. The samples were divided into two groups by Hcy levels. A high homocysteine (HHcy) level was defined as a Hcy level higher than 15 μmol/L. A non-HHcy level was defined as a Hcy level lower than 15 μmol/L. The other serum sample was used to measure folic acid and vitamin B12 levels. Folic acid and vitamin B12 levels in the serum were determined with chemiluminescence using a Roche 2010 electrochemiluminescence analyzer and its FA, and VB12, detection kits. 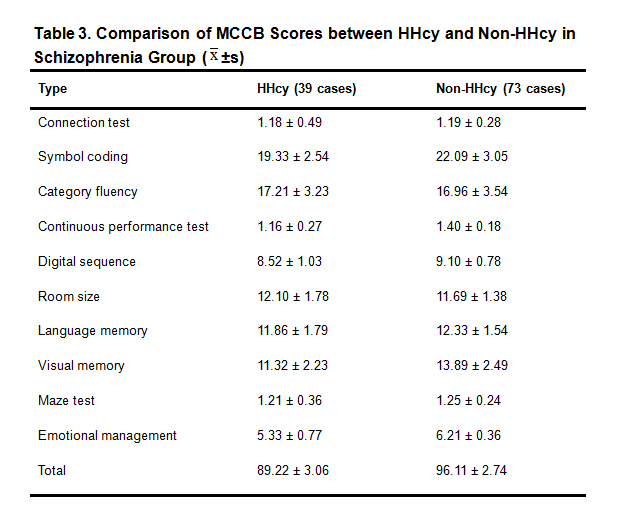 Homocysteine (Hcy) is a sulfur-containing amino acid formed after methionine demethylation. It was discovered in the urine in the early 1960s as a methionine cycle intermediate metabolite. Hcy is present, in serum, in a form that binds with serum proteins. A small fraction of it is present in free form [10]. Hcy can oxidize causing damage to the vascular endothelial cells and the brain tissue so as to result in the organic mental disorders. Genetically, the abnormal Hcy metabolism oftens causes DNA methylation disorders and increases the risk of schizophrenia. Along with genetics, diet, metabolism and other conditions, it has been reported that abnormal Hcy increase may result in the high Hcy levels in mothers during fetal development, which may cause a high congenital Hcy level in newborns. Some studies show that the abnormal increases in Hcy level is related to folic acid and VB12 efficiency. The study this paper reports performed a relative comparison. The results showed that only SP had significantly different VB12 and folic acid levels. These levels were not significantly different between the SG and the CG. This result is consistent with the viewpoint of some reports that the supplementing or adding folic acid can improve cognitive disorders [11]. This may be related to sample selections of healthy examinees sample limitations and warrants further investigation.

SG plasma Hcy level and HHcy rates of were significantly higher than the CG. The difference was statistically significant. The results suggest that Hcy level is closely related to schnizophrenia which tends to confirm the view that Hcy metabolism abnormality is an important risk factor for schizophrenia pathogenesis.

Significant cognitive disorders have been clinically recognized in schizophrenics. Prior studies found that serum Hcy can affect 5-hydroxytryptamine, and frontal lobe dopamine, biosynthesis. It may further affect front lobe functions. Prefrontal lobe hypofunction is associated with the cognitive disorder. This allows the speculation that Hcy serum levels in schizophrenics may be correlated with cognitive function. In the FESPs in this study, subjects with serum Hcy levels higher than 15 μmol/ L had significantly lower cognitive function than subjects whose serum Hcy level was less than 15 μmol/L. The results showed that, the higher the serum Hcy level is, the more severe the cognitive disorder of the patients may be. The severity of the cognitive function of the patients is positively correlated with Hcy levels. This suggests that serum Hcy levels may provide a basis for clinically diagnosing cognitive disorder severity. The sample size of this study was relatively small and other relevant indicators affecting the Hcy metabolism, such as VB6 and methylenetetrahydrofolate reductase (MTHFR), were not detected. Universality needs to be confirmed by clinical trials of more and larger samples. The specific pathological mechanism of Hcy involvement in the schizophrenia awaits to further study.

This study suggests a lower cognitive score and weaker cognitive ability in schizophrenics with a high Hcy levels. It suggests that the elevated serum Hcy levels may be used as a laboratory-aided diagnostic indicator for cognitive disorder severity in patients with first-episode schizophrenia.

The authors declare that they have no conflict of interest.