Objective: To investigate the correlation between plasma drug concentration of aripiprazole and its clinical efficacy in the treatment of children and adolescent patients with schizophrenia.

Methods: 27 cases of children and adolescent patients with schizophrenia received oral non-fixed dosage of aripiprazole for 8 weeks. The plasma concentration of aripiprazole was determined with High Performance Liquid Chromatography (HPLC). The psychotic symptoms of patients were evaluated with Positive and Negative Syndrome Scale (PANSS) and the adverse reactions were assessed with Treatment Emergent Symptom Scale (TESS).

Conclusion: The plasma concentration of aripiprazole is correlated with its clinical efficacy in the treatment of children and adolescent patients with schizophrenia symptoms, and the suitable concentration range is 285.2~440 ng/ml.

Participants comprised 27 patients diagnosed with schizophrenia present in the Jiangxi Mental Hospital between July 2015 and June 2016. Of the 27 patients, 14 patients were male and 13 were female (Avg. age 15 ± 2). The duration of illness ranged from 1 to 42 months with a median of 5 months.

Eligible subjects met the following inclusion criteria: 1) primary diagnosis of schizophrenia and confirmation of the schizophrenia diagnosis by an adequately trained clinician (e.g., child psychiatrist) at the time of screening, by means of the International Statistical Classification of diseases and related health problems 10th revision (ICD-10); 2) age 12 to 17 years inclusive; 3) Han nationality; 4) a baseline a Positive and Negative Syndrome Scale (PANSS) score of 60 or higher; 5) written, informed consent was included.

After 3 to 5 days of drug washout period, the patients were started to receive oral aripiprazole at an initial dose of 5 mg / day (split into twice a day). Based on the individual tolerance the dose of the drug was gradually increased every 3-5 days by an increment of 5 mg with a maximal daily dose of no more than 30 mg. The course of treatment lasted for 8 weeks. During the study, patients were treated with benzodiazepine for insomnia; metoprolol for tachycardia, and Trihexyphenidyl for the emergence of extrapyramidal reactions.

2) Safety and Tolerability Assessments: The measurement of side effects was based on the score of the Treatment Emergent Symptom Scale (TESS). The Kappa value is greater than 0.8.

Blood samples were collected at 6:00 am on the morning of the 1st, 2nd, 4th and 8th weekend after taking the drug. After centrifugation, the supernatant serum was collected and stored in a Freezer set at - 80 ℃ for storage. Aripiprazole plasma drug concentrations were determined using high performance liquid chromatography (HPLC). Aripiprazole used for treatment was purchased from the China Pharmaceutical and Biological Products (purity greater than 99.8 %). The minimal plasma Aripiprazole concentration that can be detected was 5 ng / ml, and the minimum dose was 2.5 ng. The average extraction recovery was 81 % and the recovery rate was 96 ~ 99 %.

3.1 Comparison of PANSS scores before and after aripiprazole treatment

Table 1. shows the scores of PANSS in children and adolescents with schizophrenia before and after aripiprazole treatment. The PANSS total score, positive symptom score, and general psychopathology score showed noticeable decrease starting from the second weekend (p < 0.05). Compared with the baseline, PANSS total score and each factor score showed a significant reduction from week 4 (p < 0.05 or 0.01). 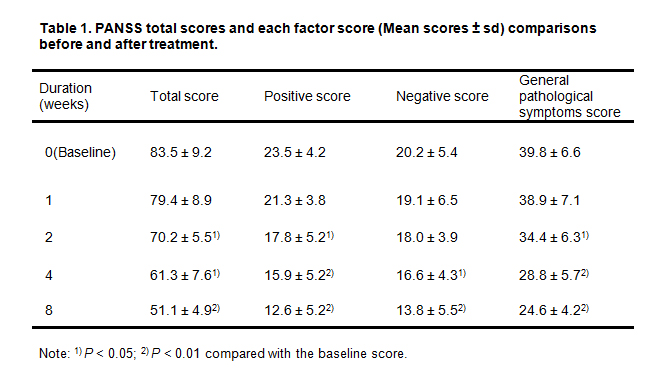 Table 1. PANSS total scores and each factor score (Mean scores ± sd) comparisons before and after treatment.

Previously, aripiprazole has been shown to be a partial agonist at the D2 dopamine receptor[4].The stabilizing effect of aripiprazole on the dopamine system was attributed to its targeting of presynaptic (auto-receptors) and post-synaptic D2 receptors0000[3]. Therefore, it is effective to positive symptoms, negative symptoms as well as symptoms of cognitive impairments. In addition, aripiprazole is classified as a medication with significant 5HT2Aantagonism, and with still other additional secondary binding characteristics such as 5-HT2C, 5-HT7, epinephrine α1 and histamine H1 receptors. Its unique mechanism of action makes aripiprazole as a favorable clinical treatment choice over others, i.e. high efficacy, fewer extrapyramidal reactions (EPS), does not cause weight gain, does not cause the incensement of prolactin (PRL)[3, 12-13]. Consistently, our results showed that the overall response rate of aripiprazole treatment was 70.4 %, which was similar to that reported by Beijing Anding Hospital[7]. The PANSS total score, positive symptom score and general psychopathology score decreased significantly from baseline level starting from the second week of treatment, and the negative symptom score began to decrease significantly from the end of the fourth week of treatment until the end of the study.

This work was funded by grants from the Project of Nanchang Science and Technology Bureau of China (2014SFZC017) and the Natural Science Foundation of Jiangxi Province of China (20171BAB205020).