Methods: Seventy-eight patients with depressive disorder of ICD-10 criteria were recruited for the trial. All subjects were randomly divided into the active rTMS group (receive active rTMS) and sham group (receive sham rTMS). Each group received low frequency active or sham rTMS combined with 10 mg escitalopram per day. Patients in the active rTMS group were treated with active rTMS for continuous two weeks, while the sham patients were treated with pseudo stimulation. HAMD, HAMA and TESS were used to assess the efficacy and side effects before the treatment and at the ends of the second week and the fourth week of treatment, respectively.

Conclusion: The right low-frequency rTMS technique combined with escitalopram in treatment of depressive patients in general hospitals has a significant better effect than mono-pharmacotherapy and can shorten the time of treatment.

The repetitive Transcranial Magnetic Stimulation (rTMS), a safe, noninvasive and painless nerve stimulation technique that has been applied in the field of neuropsychiatry in recent years, showed a reliable effect on neuropsychiatric disorders[1]. At present, a large number of clinical trials have confirmed that the efficacy of treating the depressive disorder using high frequency rTMS to stimulate dorsolateral prefrontal cortex (DLPFC) at right brain has been widely recognized[2, 3]. However, there are fewer studies on treatment of depressive patients using the right low frequency rTMS technique to stimulate DLPFC. This study aims to explore the early clinical efficacy and side-effect impact of right low frequency repetitive transcranial magnetic stimulation (rTMS) therapy combined with escitalopram in treating outpatients with first-episode depression in general hospitals. 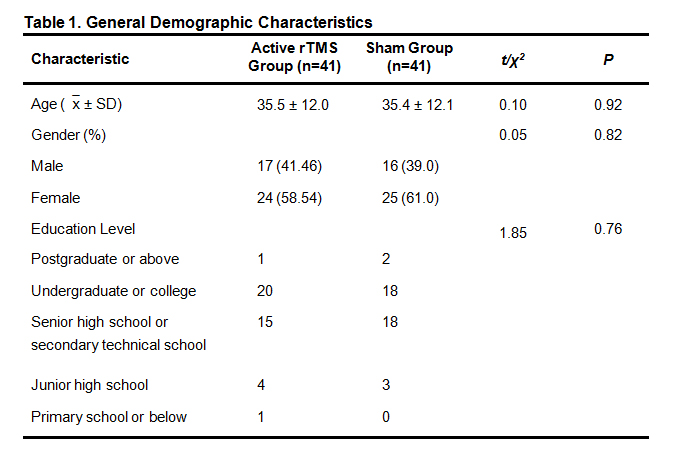 The research method of randomized controls was used to divide the 82 subjects into the active rTMS group and sham group using the random number table method. YRD CCY-1 transcranial magnetic stimulation instrument was used. 1Hz and 100 % exercise threshold value was used in the active rTMS group to stimulate the right prefrontal lobe lateral area. The total number of each stimulus pulse was 1200 and total stimulation time was 20 minutes, and the continuous treatment time was 10 work days. The pseudo-stimulated therapy was used in the sham group (the angle between stimulus coil and scalp was 90 degrees or 45 degrees, and no effective magnetic field was provided to it), and the stimulation intensity, frequency and times were the same as those in the active rTMS group. During the study period, all subjects were treated with escitalopram, 10 mg/d (specification: 10 mg/tablet).

HAMD-17, HAMA and TESS were used to assess the clinical efficacy and side effects. The scale assessment was made by 4-5 specially trained psychiatrists and the consistent test was also made. The assessment was made before the treatment, and at the ends of the second week and fourth week of treatment, respectively; the score-reducing rate was used to assess the clinical efficacy: it was regarded as effective when score-reducing rate ≥ 50 %. TESS was used to assess the safety. The maximum score of all items that was equal to or greater than 2 points after the treatment was regarded as adverse reaction.

All information or data were recorded and analyzed using software SPSS16.0, and the relevant information was compared using the methods of χ2 test, t test and variance analysis.

After the treatment, HAMA score of the active rTMS group was significantly reduced at the ends of both week 2 and week 4 and the difference was statistically significant (p < 0.01), see Table 3.

No severe adverse reaction was occurred during the study period among the subjects of two groups. There were two cases of scalp pain and dizziness in the active rTMS group, but they were self-mitigated without treatment. There was no tinnitus, convulsion or other adverse reaction in both groups.

The depressive disorder has a high prevalence, high recurrence rate, high disability and high suicide rate. In recent years, a significant progress has been made in the study on the treatment of depressive disorder using the rTMS treatment technique. The studies of cerebral cortical function showed that, for a bilateral DLPFC dysfunction of depressive patients, the left DLPFC involved in the generation and regulation of positive emotions and the right DLPFC involved in the generation and regulation of negative emotions, while the left DLPFC function of depressive patients was abnormally weakened and the right DLPFC function was abnormally enhanced. The emotional disorder of patients can be improved by improving the patients’ DLPFC functions[4-6]. The outpatients of psychology department/psychiatry department of general hospitals are mostly patients with anxiety and depression. It has been reported that 63.8 - 90.1 % of the depressive patients who have been diagnosed and treated in psychiatry department paid their first visit to the general hospitals[7]. At present, antidepressant effect is slow, the drug side effect at the initial stage of treatment is obvious, and the treatment cost is very high. All of those cause a poor medication compliance of the patients. If the outpatient doctors can control the acute symptoms in a faster and better way, it will help improve the patients’ treatment compliance. Moreover, a rapid effect and early cure can also have a better predictive effect on prognosis [8]. Hence, the improvement of early treatment efficacy in patients with first-episode depression will help fully cure the patients and reduce the complexity and refractoriness of the diseases. In the past, rTMS treatment techniques were mostly concentrated on the left high frequency studies. Compared with the left high frequency stimulation therapy, studies suggest that, the right low-frequency rTMS treatment technique is not easy to induce the convulsions relative to the high frequency stimulation, and it is of a lower risk and better tolerance and it may be the best treatment method[6, 9]. The right low-frequency rTMS treatment method was used in this study.

Furthermore, there was no epilepsy, convulsion or other severe adverse reaction in all subjects in this study, and there was a good safety during the treatment period. Compared with the adverse reaction of the sham group, the difference was not statistically significant. It is noteworthy that, some studies showed that, compared with the high-frequency magnetic stimulation of left brain dorsolateral prefrontal cortex in treatment of depressive patients, the patients were more tolerant of the right low frequency rTMS therapy. This suggests that the rTMS therapy method used in this study is worthy of promotion.

In summary, this study shows that, the antidepressants combined with the right low frequency rTMS technique can significantly shorten the effect time and enhance the efficacy of antidepressants and effectively mitigate the patients’ anxiety and improve the treatment compliance of the patients. It has a good safety and applies to the non-hospitalized depressive patients.

Due to restrictions of time conditions, treatment equipment and personnel lack, the study sample was relatively small and observation time was short. In the follow-up studies, we will try the best to increase the number of samples and extend the observation period after treatment so as to draw a more convincing conclusion.