Obsessive-compulsive disorder (OCD) is a common mental disorder clinically characterized by repeated obsessions and / or compulsions, as well as concomitant anti-compulsions and competent pains. OCD is often comorbid with a personality disorder (PD), most commonly OCPD, of which the comorbidity rate is 23 % - 32 % [1]. Some studies have shown that OCD patients with OCPD were characterized by a severer compulsive symptom, an earlier age of onset and weaker response to drug treatment[2-4]. Based on the difference of clinical manifestations, some researchers believed that OCD comorbid with OCPD might be a sub-type of the OCD[2, 3]. However, the results of these studies were not consistent. For example, Lochner, et al. found that no earlier age of onset was found among the OCD patients with OCPD, and that there was no difference in treatment effect on cognitive behavior[5].

There were 87 OCD patients in this study and they were outpatients from psychological department of the Second Xiangya Hospital from 2013 to 2015, including 54 male patients and 33 female patients, aged 18 - 40 years old, with a mean age of 24.35 ± 4.96 years. All patients conformed to the OCD diagnosis criteria of the fourth edition of the Diagnostic and Statistical Manual of Mental Disorders (DSM-IV) and they had no history of other mental illnesses, neurological disorders, or severe physical illness. Forty-five of these patients complied with the OCPD diagnosis criteria of the Structured Clinical Interview for DSM (SCID-II) and they were included into the comorbidity group (OCD + OCPD); the other 42 patients were not associated with OCPD and they were included into the non-comorbidity group (OCD - OCPD); 54 healthy volunteers were recruited from communities and universities as the subjects of control group, and they were reported without history of mental illness, central nervous disease, drug abuse, or major physical illness. All subjects were reported with normal or corrected normal eyesight, without color blindness, or dextromanuality, and they had signed informed consents and voluntarily participated in this study. This study was approved by the medical ethics committee of our hospital.

The Stop-Signal Task (SST) was used to test the response inhibition function of the subjects. The subjects were required to perform a simple reaction time task (“go” task), that is, make the key-pressing response (press the space key) when the “go” stimulus (letter “X”) appears in the computer screen. SST included two types of tests, namely, ‘go’ tests (accounting for 70 %) and ‘stop’ tests (accounting for 30 %). In the “go” tests, only “go” stimulus appeared. In the “stop” tests, letter “X” would be changed from black to red. This color change was a stop signal, suggesting that the subjects needed to inhibit the key-pressing response. The initial value of “go” stimulus and stop-signal distance (SSD) was 250 ms, and the change of SSD was calculated using the ladder algorithm. If the subjects successfully inhibited the key-pressing response, the SSD of next “stop” test would increase by 50 ms, otherwise it reduced by 50 ms. Before the formal experiment, an exercise of 20 tests was performed so that the subjects could master the key-pressing operation and experiment requirements. 400 tests (including 120 “stop” tests) were required for the formal experiment. The subjects had a resting period of 1 minute every 100 tests.

The difference of ages, education levels, depressions, anxieties and behavioral outcomes of the subjects in the three groups was analyzed and compared using one-way analysis of variance (ANOVA) analysis, and a statistical comparison of the gender ratio was performed with a Chi-squared test. Results were corrected for multiple comparisons using Bonferroni correction. The independent two-sample t-test was used for the comparison between the OCD + OCPD and the OCD - OCPD group, respectively. The two-sided tests were used for the F-test and t-test, and the one-side test were used for the Chi-squared test. We used the significance level of 0.05. All statistical analyses were completed using the statistical software package SPSS19.0.

The statistical results of demographic data and scale scores of the subjects in three groups are shown in Table 1. 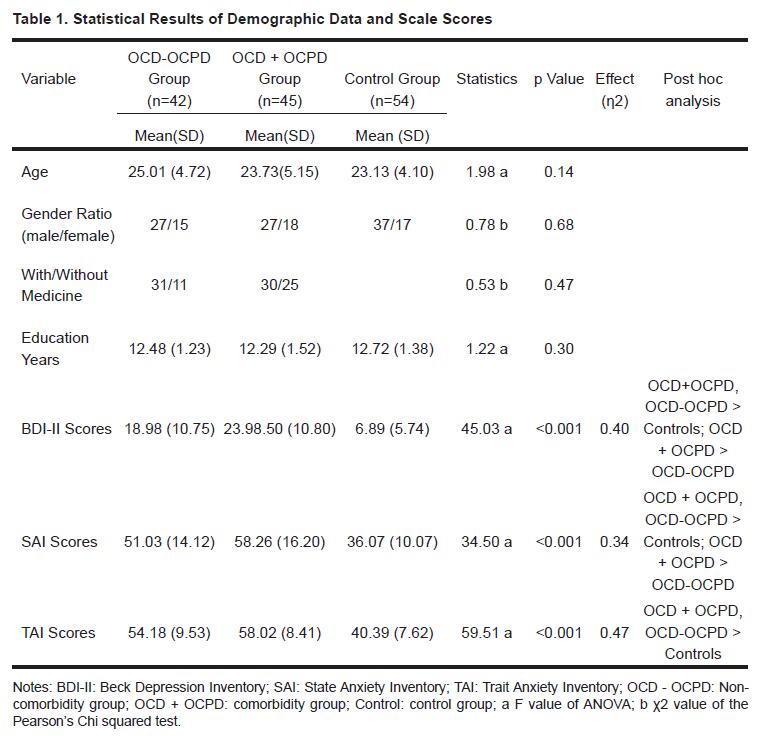 The comparison results of clinical differences of two groups of obsessive-compulsive patients are shown in Table 2. As shown in the table, no significant difference was found in onset age and disease course of the two groups, but a significant difference was found in the Y-BOCS total scores, Obsessive scores, and Compulsive scores. Furthermore the score of OCD + OCPD Group was higher than that of OCD - OCPD Group (Y-BOCS: 30.27 vs 25.63, p < 0.05; Obsessive: 16.02 vs 14.33, p < 0.05; Compulsive: 14.24 vs 11.30, p < 0.05). 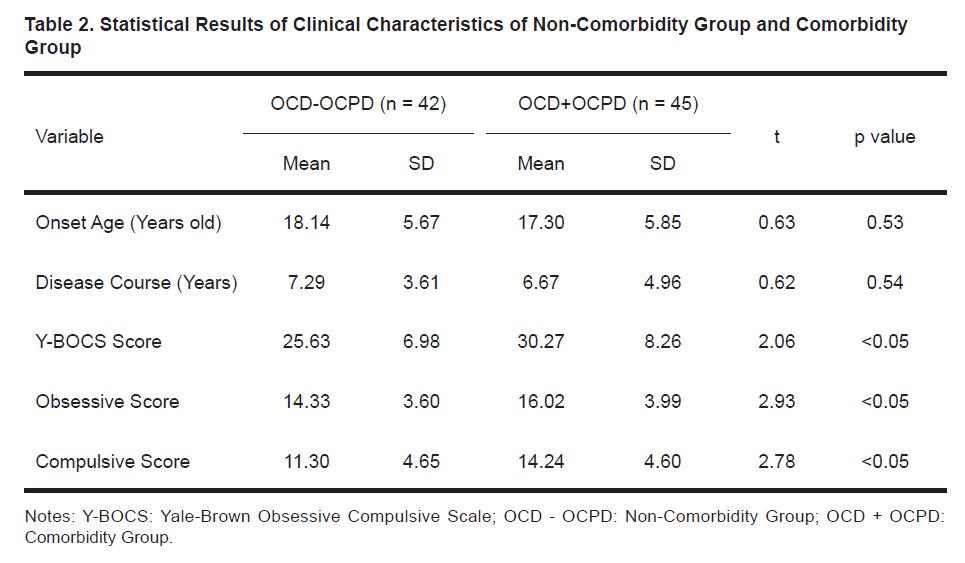 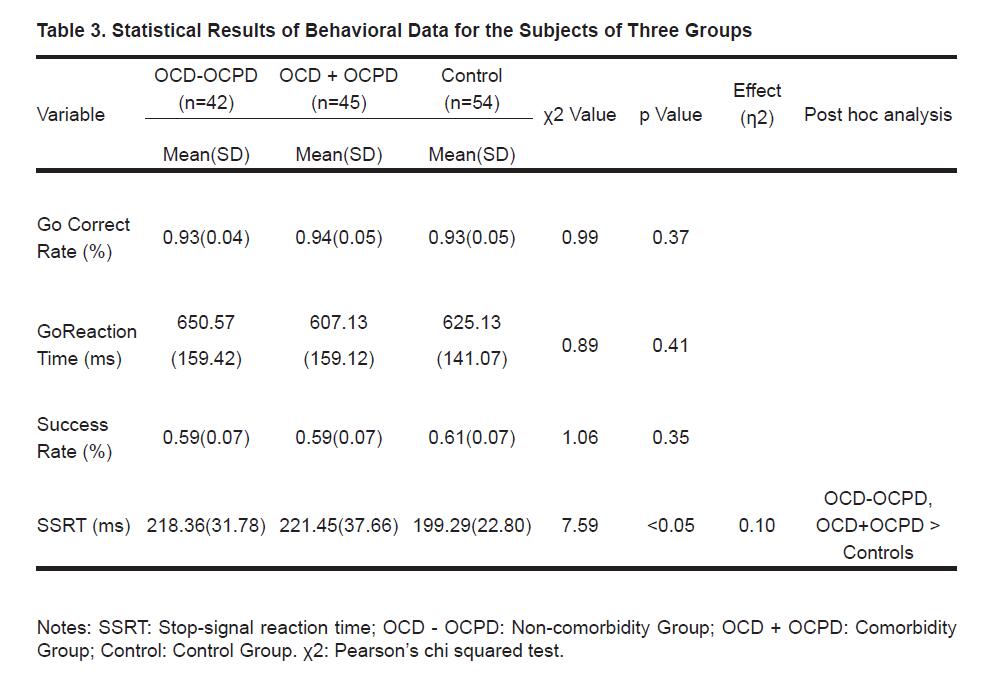 Table 3. Statistical Results of Behavioral Data for the Subjects of Three Groups

The present study results showed that OCD patients with OCPD had a higher level of depression and anxiety and more severe obsessive-compulsive symptoms than that of OCD patients without OCPD, which is consistent with the previous studies. For example, Gao, et al.[10] found that the symptoms of OCD + OCPD group was more severe than that of OCD - OCPD group. This suggests that the OCD + OCPD has aggravated the severity of OCD.

There are some limitations for this study: obsessive-compulsive personality disorder group (OCPD - OCD) was not included in this study and it is necessary to add such a clinical control group to further clarify the overlap or specific relationship of OCD to OCPD in clinical characteristics and response inhibition function characteristics; furthermore, only behavioral data was obtained in this study and thus, electroneurophysiological or neuroimaging techniques should be used to explore the neurophysiological characteristics of OCD patients with OCPD in the future.

In conclusion, the study result shows that comorbid OCPD will not aggravate the impairment of response inhibition functions of OCD patients, which indicates that OCPD only partially affects the same cognitive functions as of the OCD patients.

This paper was supported by the Natural Science Foundation of Hunan Province China (grant No.2016JJ3067).