Probe into Color Preference in Inpatients with Depressive Disorders

Objectives: To explore the preference of color (abstract and environmental colors) by patients with depression before and after the therapy and the relations between their preferences and depression levels.

Colors are everywhere in our daily lives, they delivers psychological stimulus through individual aesthetics. Color is often associated with emotions, such as “depression and blue”, “red and anger”, etc. Some studies show that the subjects whose Beck Depression Score is greater than 10 tend to choose black or brown to represent their emotions, and subjects who have a higher anxiety score prefer soft colors to relieve their anxiety[1]. A survey of Carruthers, et al.[2] shows that people with anxiety and depression will choose grey to represent their sad mood. According to von Goethe,[3] a German litterateur, different color tones, warm or cool, can trigger different emotions: the warm ones can inspire liveliness and optimism, while the cool ones can stimulate anxiety and uneasiness. According to research, though patients largely share the same associations of the symbolism of each color, they also have the distinct features of their own that are tightly connected to their physical perception of colors and varied personal experiences. And then, Cognitive factors, especially cognitive bias (Excessive focus on negative information) is one of important factors of the production, persistence and development of the depressive disorder[4]. By far, many research shows that there is a connection between the depressed, anxious population and their preference of colors. However, there is no document specifically shows what colors preferred by patients with depression in different emotional states and how they relate to their emotions. Past research on color was only confined to abstract or environmental colors with very limited attentions on depression patients, and very rarely were there any investigative analysis of the two color phenomena. This research aims to discuss the preference of color (abstract and environmental colors) by patients with depression in different emotional states before and after the therapy and the relations between their preferences and depression levels, emotions. The study results are reported below.

195 depression inpatients including 94 male and 101 female were selected from Chongqing Mental Health Center from January 2015 to December 2015. They were identified to comply with the major depression diagnosis criteria of “Mental and Behavioral Disorders of International Classification of Diseases (ICD-10) ”. They were all Han Chinese and aged 18 - 60 years old, with a mean age of 42.27 ± 11.70 years old and average education level of 11.66 ± 3.66 years. Exclusion criteria: a. patients with color blindness and color amblyopia; b. patients whose organic mental diseases and acute mental disorders cannot be thoroughly investigated. This research experiment was approved by the local ethics committee. The written informed consents were signed by all subjects before the experiment. The difference of gender, age and education level and other data between the two groups was not statistically significant (p > 0.05).

Healthy volunteers were recruited through the community during the same period and were identified to be free from mental disorders in accordance with the requirements of ICD-10. The distribution of this control group statistically matched the gender, age and culture of the depression group. There were 1005 health volunteers, including 530 male volunteers and 475 female volunteers, with a mean age of 37.97 ± 10.47 years old and average education level of 11.78 ± 3.74 years. The informed consents were signed and they were willing to cooperate with the physical examinations see Table1. 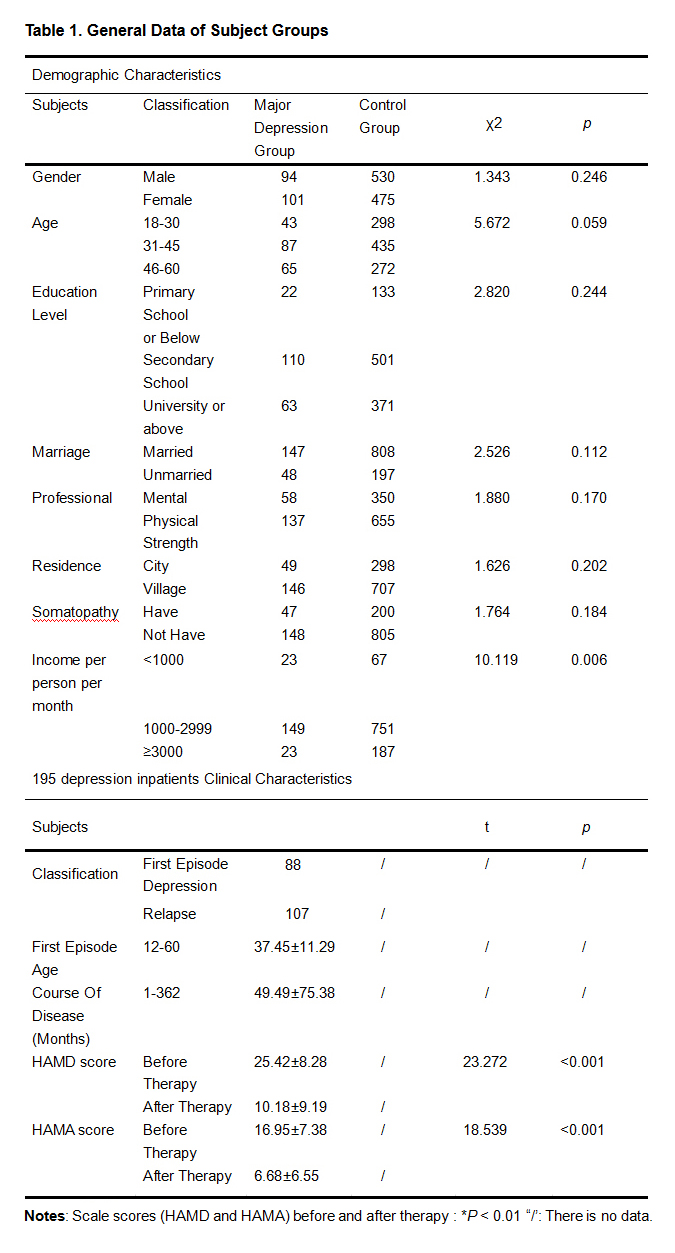 The common questionnaires were self-made to survey the gender, age, marriage, education level and other demographic characteristics of the subjects. Then, professionally trained psychiatrists were invited to test the subjects' preference for abstract color and environment color. The Hamilton Depression Scale (HAMD) and Hamilton Anxiety Scale (HAMA) were used to assess the symptoms and the patients were re-tested and re-assessed at six weeks after the antidepressant drug therapy. (See Table 1, Clinical Characteristics)

The subjects’ preference for abstract colors was investigated using the approach of paired comparison[5]. The color cards of red, orange, yellow, green, blue, purple, white, black and grey were selfmade. The nine kinds of color cards were put in pairs to make 36 combinations. They were divided into the photo albums in two groups, with 36 photos for each group. Each subject was required to complete 36 selections between Group A and Group B. The bench method was used to show the presentation sequence of arranged colors. Two colors of each card were marked as 1 and 0, respectively. Supposing a subject chose the card 1 of Group A, if it indicated that the subject was more like the red, we marked it as 1; if it indicated that the subject was more like the orange, we marked it as 0. Adding all scores of the same color together, the sum was the score of color preference. The higher the score was, the higher the preference degree would be.

The digital images were used as the visual stimuli in the ranking method[6] used to measure the color preference for each subject. Nine ward pictures of the same scene and different background wall colors were obtained, namely, red, orange, yellow, green, blue, purple, white, black and grey. A subject was asked to choose their favorite color from the nine pictures. All pictures were sorted or ranked according to the degree of preference, and they were marked as 1, 2, 3 … until 9 in turn. Card 1 in the ranking sequence represented the most favorite color, and Card 9 in the ranking sequence represented the least favorite color. Each of the nine colors in scores 1 - 9 was assigned. The lower the score was, the higher the degree of preference would be. 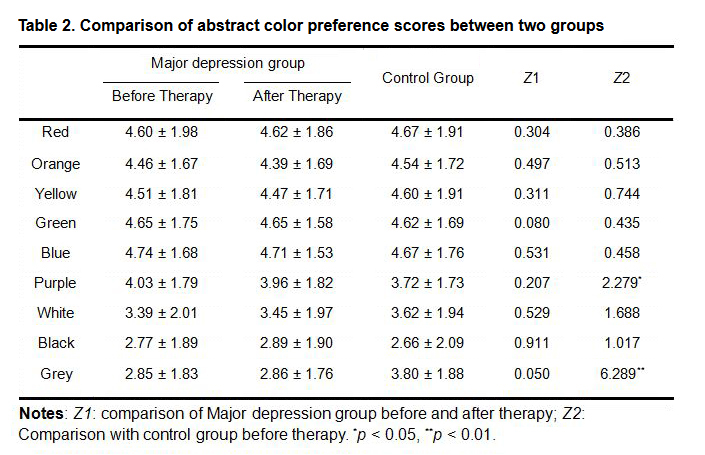 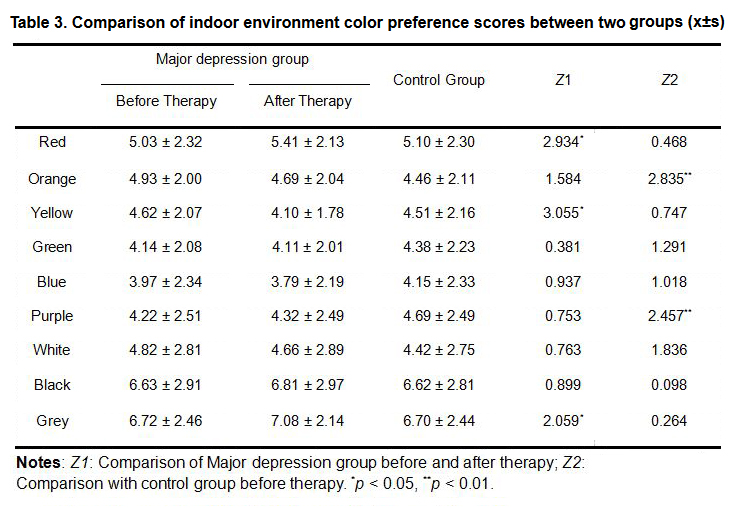 The indoor environment color preference sequence of Major depression group was sorted from high to low: blue, green, purple, yellow, white, orange, red, black and grey. Compared with the control group, the rank correlation coefficient r = 0.722, and statistically significant test u = 2.606 > 2.58, so p < 0.01, which indicated that the rank correlation of color preference sequence between Major depression group and control group was statistically significant and their tendencies in color choice were consistent.

2.5 Analysis to Correlation between Patients’ Color Preference Scores and HAMD and HAMA Scores

Table 4.HAMD and HAMA Scores before and after therapy 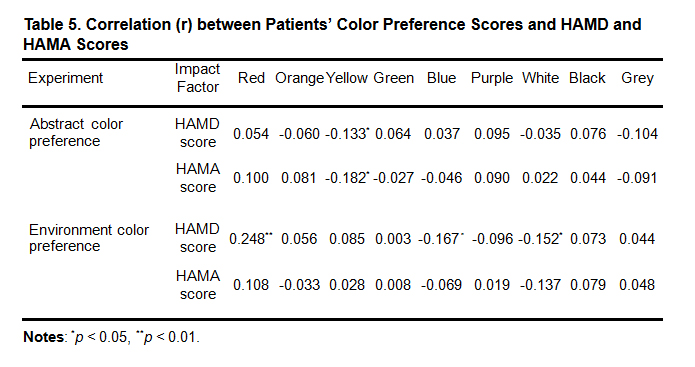 The test results of indoor environment color preference showed that the blue was again the most preferred color of the patients with depressive disorders and the grey was their least preferred color. Only the ranking of yellow changed six weeks after therapy, where the preference of red and grey decreased significantly and the preference for yellow increased significantly. The negative psychological effect of grey is depression and pessimism the red can accelerate the heartbeats and raise the blood pressure, which gives people the feeling of excitement, enthusiasm or anger. An excessive exposure to the red will cause anxiety and physical / mental stress, causing an individual to be tired out. Hence, the color preference of patients for red and grey decreased after the remission of emotional symptoms. The preference of depression patients for indoor environment color was closely associated with their emotional and psychological states. Moreover, the preference of depression patients for the purple was significantly higher than that of healthy volunteers, while their preference for the orange was significantly lower than that of control group.

This study further showed that whether it was abstract color or indoor environment color, the patients with depressive disorders preferred blue, and their preference for purple was significantly higher than that of healthy people. It was indicated the depression patients preferred the cold colors. This might be due to the psychological belief that the cold colors could stabilize and calm down a restless or uneasy mood[9]. However, some studies also pointed out that the patients with depressive disorders should not be exposed in blue or other cold colors, otherwise it could aggravate the disease conditions[10]. The study results of Nolan, et al. pointed out that yellow was soft warm color that could reduce the anxiety level of patients[1]. The analysis of correlation between color preference scores and symptom scores of depression patients shows that in the aspect of abstract color, a significantly negative correlation was found between yellow preference and HAMD score and between yellow preference and HAMA score. This indicates that the preference test of abstract yellow may have a certain predictive value for the assessment of depression mood. In the aspect of environment color, a significantly positive correlation was found between red preference sequence and HAMD score, while the blue and white preference sequences were significantly negative correlated. This indicates that, the higher the depression score is, the more unfavorable to the red, and the more favorable to the blue, white and other cold colors. This was consistent with the study result of Dai Hong, et al.[11] Therefore, it is recommended that the application of colors to the ward environment design of patients with depressive disorders can play a role of adjuvant therapy in anxiety and depression of patients with depressive disorders.

There have a little deficiencies in this study. The antidepressant may have an effect on color preference, so the experiment needs to be further improved and confirmed. In addition, further research is needed to clarify the correlation between color application and depression emotional state, and to explore the value and potential of application color for psychotherapy in patients with depression.

This study was supported by government (Key research project of Chongqing health and Family Planning Commission) (Program No. 2013-1-045).