Aims: To review the progress of cognitive impairment of chronic alcohol dependence and its relationship with prefrontal cortex (PFC)

Method: A literature review of via Pubmed searches to assess the current state of the field.

Results: Cognitive impairment, particularly executive dysfunction, is a very important characteristic of alcohol dependence. The executive function is one of the most important frontal lobe activities. Chronic alcohol exposure can change the PFC morphological structure and integration function and the resulting defects can be observed in cognitive function. The PFC function mainly manifests the lack of executive function. Changes in PFC structure and functions can result in disordered regulation of neurobiological activities.

Conclusion: The importance of the long term change of PFC executive function and associated neuron work is equal to or greater than that of the dopamine reward system when talking about mechanism underlying cognitive impairment.

Dependence on alcohol dependence (DA) results in a chronic and recurrent encephalopathy with an extremely high recurrence rate. It is a mental disorder clinically characterized by forced drinking behavior, increased tolerance to alcohol, withdrawal symptoms upon cessation, and is accompanied by significant cognitive impairment and social and occupational dysfunction. World Health Organization (WHO) studies have shown that there were approximately 140 million DA patients in the world. More than 400 million suffered accidents, injuries, diseases or death as a result of excessive alcohol consumption[1]. Accompanying the rapid economic development of China, the number of DA patients has significantly increased in recent years, and alcohol consumption has also grown rapidly. Alcohol consumption per capita has increased from 2.5 L per year in 1978 to 6.7 L per year in 2010. It is estimated that per capita consumption exceeds 10 L in 2014 - 2015[2] indicates an increasingly serious public health problem resulting from alcohol consumption.

Cognitive impairment is a very important characteristic of drug dependence. Studies show that a long-term use of alcohol, heroin, methamphetamine and other addictive substances can cause more serious cognitive impairment. It is generally believed that the long-term, repeated use of additive substances can cause lasting changes in brain structure and damage the local function of structures such as cerebral cortex, hippocampus and cerebellum. Structural changes include not only cortical and white matter atrophy and ventricular dilatation caused by loss of neurons, but also changes in neurotransmitter, number of receptors and sensitivity in dendrites and synapses. The latter may be the biochemical basis of brain function change and cognitive impairment.

The GABA-A neuron is an inhibitory neuron which plays an important role in adjusting neural circuits and cognitive function. The GABA-A receptor consists of 8 subunit clusters and 19 subunits, including: α1-α6; β1-β3; γ1-γ3; δ; θ; ε; ρ1-ρ3; and π Different subunits have different functions. It was generally believed that the α1 subunit mediated sedative effects, and that the α2 subunit mediated the anxiolytic effect. α5 might play a significant role in aspects of cognitive function[4].

Studies show that neuronal synapse plasticity changes and pathologic learning and memory formation are important biological mechanisms of cognitive function changes. This process involves the synaptic transport of persistence and functional dependence. Long-term and repeated alcohol use as a central nervous system inhibitor changes the transport process of synaptic multisignaling molecules. Glue, GABA, and other receptor activation leads directly to changes in other neurotransmitters and ion channels causing LTP and LTD changes, and finally results in synapse plasticity change. This may be one of the most important biological mechanisms by which alcohol induces cognitive impairment. Other studies also suggest that central nervous system cognitive impairment results from chronic alcohol exposure and depends on the common regulation of GABA/Glu. Alcohol’s repeated activation of GABA-A receptors, in and out of synapse, has inhibited the effect of NMDA receptors and mGluRs and AMPA receptors and leads to cognitive function changes[5].

There are a few studies of the effects of GABAAα5 on addictive behaviors. Studies show that PFC GABA-Aα5 mRNA expression in Wistar rats is positively correlated with alcohol consumption (r = 0.96)[9]. Ethanol-induced LTP inhibited by GABAAα5 is involved with emotion-related learning and memory impairment. Other studies suggest that prenatal chronic alcohol exposure increases GABAAα5 expression and leads to damage to learning skills. This suggests that alcohol-induced learning and memory impairment may result from changes in NMDA and GABA expressions and functions[10]. This also suggests that GABA-Aα5 plays a significant important role in regulating any cognitive impairment resulting from DA.

A significant cognitive impairment exists in patients with chronic alcohol dependence (mainly executive dysfunction), while the executive function is one of the most important frontal lobe functions. Several studies show that significant structural and functional defects exist in prefrontal cortex (PFC) of patient with chronic Alzheimer’s Disease (AD).

2.1 Anatomy and Function of Prefrontal Cortex 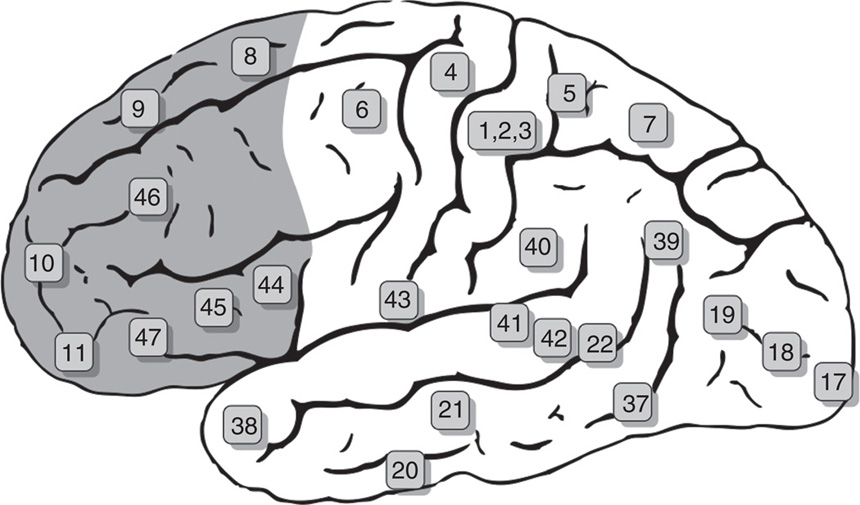 The frontal cortex belongs to an association cortex, which connects the cortex of different sensory areas and motor areas with sufficient afferent and efferent fibers. Its main function is to integrate cerebral cortex and subcortical structure information and use it to complete a response so as to adapt to current and future environmental changes. In humans, the frontal lobe integrates a variety of information, actively, purposefully, and designedly to adapt to environmental change [12].

These networks mediate higher command behaviors, such as, purposeful direct behavior, language, and reasoning. They perform a series of functions to properly control these goal-oriented behaviors[13].These behaviors include an executive function that 1) predicts the current situation; 2) directly selects stimuli associated with the current situation; 3) eliminates unrelated stimuli interference; 4) presents any associated past memory; 5) plans behavior order as per past memories and current associated stimulus; and 6) encodes execution steps[14]. This suggests that the execution function is one of the most important functions of prefrontal cortex.

Studies show that chronic alcohol exposure can change PFC morphological structure and integration functions with the defects observable in cognitive function[15]. During a detoxification period of DA patients, PFC white matter N-acetylated aspartate levels decreased, indicating PFC white matter atrophy during the withdrawal period. Chronic DA Patient frontal lobe white-matter volume was particularly vulnerable to reduction and right orbital frontal cortex white matter integration functions were significantly impaired[16]. Studies show that the number of neocortical cells did not significantly decrease even if there was a significant decrease of all cortical volumes. This suggests cell body and axon atrophy or dendrite degeneration rather than cell death. This finding is consistent with studies of the frontal cortex cingulated gyrus. Other studies show that DA patient ventricular volume decreased 6-9 months after withdrawal and rehabilitation. But PFC volume did not increase, and the density and size of PFC glial cells in dorsolateral and orbital frontal lobes changed. It is unclear whether these changes are reversible.

A significant neurobiology regulation disorder occurs in the regulation with the PFC structure and function changes. Studies show that the prefrontal cortex plays an important role in increasing alcohol sensitivity during the process of developing into AD[20]. Studies on functional genes and proteomics show that, compared with a control group, DA patient gene expression and protein levels changed significantly, and the PFC-encoded mitochondrial protein gene significantly down-regulated. This is associated with an increase of repair proteins activated by oxidative damage. It may be a response to mitochondrial dysfunction[21]. Transcription factors and DNA-encoded binding protein gene expression, protein transport, and cell apoptosis factors, also changed in specific regions. An autopsy report of prefrontal cortex in DA patients showed that, compared to a control group, transcription factor NFkappaB (transcription of suppressor genes) and its 50 subunits also down-regulated, and a synapse plasticity-related gene expression increase might play an important role in the maintenance and development process of DA[22].

The importance of the function of prefrontal cortex in addictive behaviors cannot be overstated. Some scholars argue that, for long-term change of PFC executive functions and changes to its associated neuron network, its importance is equal to, or greater than DA reward system changes[3].

The authors declare no conflicts of interest. Each author has substantially contributed to data acquisition and analysis. Zhihuo Liu provided the editing services.

This work was supported by grants from National Natural Science Foundation of China (Program No.30971050).