The Chinese Version of the Barratt Impulsiveness Scale-11: Reassessment of Its Psychometric Properties in Three Adolescent Samples

Background: Numerous studies have assessed the psychometric properties of BIS-11. But, psychometric research on the structure of the BIS-11 has been scant in different adolescent populations. This study aimed to assess psychometric characteristics of Chinese version of BIS-11 in normal adolescents, adolescents with mental disorders, delinquent juvenile and focused on testing the factor structures of Chinese version of BIS-11 based on the well-know theories in order to find appropriate structure representations of this instrument for different samples of adolescents.

Methods: The internal consistency reliability of the BIS version 11 (BIS-11) was assessed by calculating the Cronbach’s a coefficient in three separate adolescent samples: normal adolescents (n = 406),adolescents with mental disorders (n = 258), delinquent juvenile (n = 331). Confirmatory factor analysis was examined in the total sample and each adolescent sample. Omegas (w) and explained common variance (ECV) of the general factor in bifactor model were computed to measure homogeneity reliability and dimensionality of the scale.

Impulsivity, as an important personality trait, is a multidimensional construct associated to act quickly without adequate thought or conscious judgment to achieve some goal and without consider future consequences [1]. Although, there are many self-report measures of impulsivity and constructs related to impulse-control, the Barratt Impulsiveness Scale version 11 [2] appears to be the gold-standard self-report instrument in this domain [3]. It has been considered a reliable and valid measure among various populations including community populations, normal adolescents, psychiatric patients, forensic populations. Barratt proposed that impulsiveness and anxiety represent orthogonal personality traits. Undergoing a long and tortuous course of development, Barratt and Patton [2] proposed there are three subtraits of impulsivity, which labeled as Motor impulsiveness (MOT: defined as acting without thinking), Cognitive impulsiveness (COG: associated to making quick cognitive decisions) and Nonplanning impulsiveness (NP: characterized as an orientation to the present or lacking of future) [3]. Patton revised BIS-10 which contained 34 items to BIS-11. This version remained 30 items and principal components analysis with promax rotation retained six oblique first-order factors and three second-order factors. The three second-order factors were same as previous studies, the six first-order factor were Attention, Motor Impulsiveness, Self-control, Cognitive complexity, Perseverance and Cognitive instability.

Psychometric studies of BIS-11 were assessed among adolescent samples including male Brazilian, Italian high school students, Italian college undergraduates, Chinese high school students [11,13-16].These studies have provided a prolific body of evidence suggesting good psychometric properties of BIS-11 used in normal adolescents. However, the question remains whether it should be adequately adapt to adolescents with mental disorders or in forensic adolescents. As we all know, adolescents especially for who with mental disorders or an illegal act, they have high impulsivity and therefore are at high risk of personal injury and a potential source of injury to others [14]. One of the most widely self-report impulsivity measures is Barratt Impulsiveness Scale, version 11(BIS-11). But the psychometric properties of BIS-11 [17] using in different adolescent populations rarely reported. Therefore, we test the psychometric properties of the Chinese version of BIS-11 in these three samples of adolescents (sample 1: normal adolescents, sample 2: adolescents with mental disorder, sample 3: delinquent juvenile). And we focused on testing the factor structures of Chinese version of BIS-11 based on the well-known theories and hoped to find better structure representations for scaling individual differences of different adolescent populations.

This sample including juvenile offenders and status offenders. Juvenile offenders were recruited from inmates of youth prison, detention center and reform center in Wuxi and Zhengjiang of Jiangsu Province of China. The final sample consisted 331 delinquent juvenile (266 males, 19.02 ± 2.56 years of age; 65 females, 20.28 ± 3.02 years of age). Age ranged from 14 to 25 years old. All participants in current study have signed consents forms approved by Wuxi Mental Health Center.

Impulsivity was measured by the Chinese version of BIS-11, a 30-item scale which includes three subscales named Motor Impulsiveness subscale (MOT), Cognitive Impulsiveness subscale (COG) and Non-planning Impulsiveness subscale (NP). Each subscale has 10 items and each item has 5-point Likert responses from 1 (never) to 5 (always). The total scores of this version can range from 30 to 150. Li, Phillips, Xu et al. have reported reliability of this version: the internal consistency of 30 items scale and of the three 10-item subscales were excellent (Cronbach’s alphas were 0.77-0.89) and the test-retest reliability was good (intraclass correlation coefficient were 0.68-0.89) [17].

First, basic psychometric analyses were performed for entire scale and subscales using SPSS18.0. Internal consistency reliability was assessed using Cronbach’s a, and this solution was conducted in each sample and the total sample by confirmatory factor analysis. The following models were tested and compared:

In the total sample and three separate adolescent samples, χ2/df of Model A and Model B were less than 5.00. 90 % confidence interval of RMSEA did not include 0.08. And GFI, and AGFI were according to the standard (value is greater than 0.80, meaning model is reasonable) supported by Baumgartner and Homburg [24]. IFI,TLI, and CFI were good at the value around 0.90. The value difference of these two models’ AIC, BIC were small, indicating that Model A and Model B were both good. 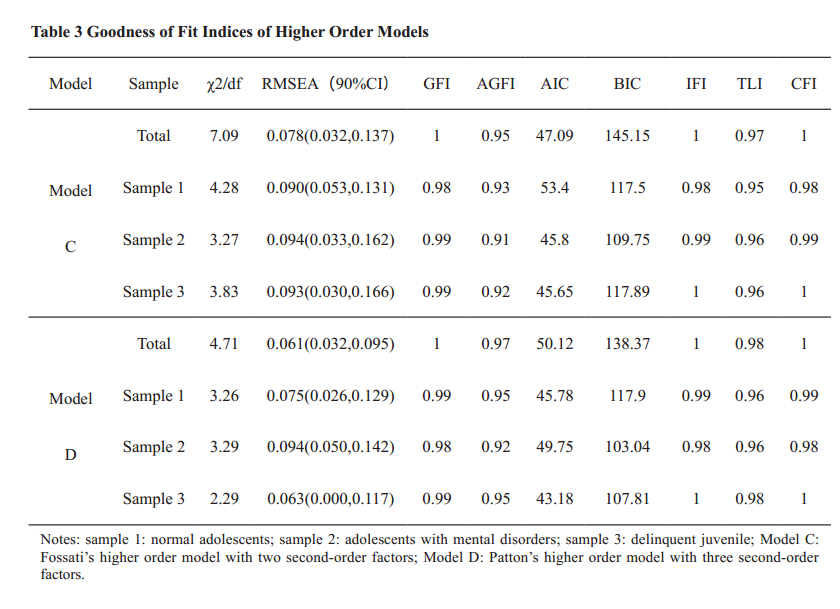 Table 4 displays goodness of fit indices of bifactor models in all adolescent samples. The chi-square value for MLM(maximum likelihood parameter estimates with standard errors and a mean-adjusted chi-square test statistic that are robust to non-normality) cannot be calculated by Mplus software. we just got SB chi-square. The ML chi-square derived from product of SB-c2 and scaling correction factor for MLM. So, thec2/df displayed by Table 4 is MLc2/df. Observed in Table 4 that in bifactor models, in all samples, model with 3 group factors seems better fitted the data than model with 6 group factors. And the bifactor model with 3 group factors was very fitted the data of forensic adolescents (c2/df =1.76, RMSEA = 0.034, TLI = 0.94, CFI = 0.95, SRMR = 0.05). 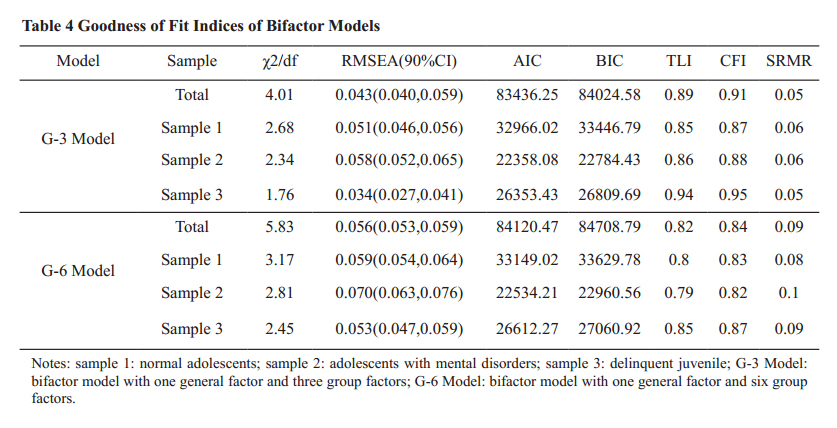 As can be seen in Table 5, the reliability coefficient (wh) of the total score in Model E were ranged 0.75 to 0.83 in all adolescent samples, which indicates good reliability. The wh in Model F were ranged 0.80 to 0.87 in all adolescent samples, indicating good reliability. In these two bifactor models, the explained common variance (ECV) of the general factor were all lower than 0.70, indicating this instrument is multidimensional. 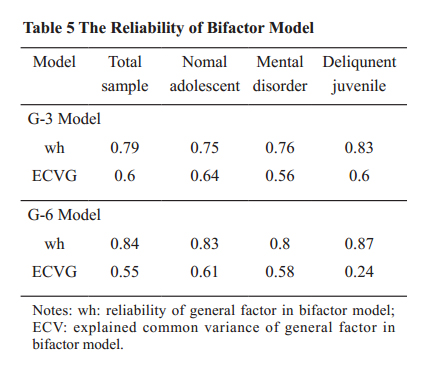 Table 5 The Reliability of Bifactor Model

Bifactor model can be thought of as a helpful tool for measuring homogeneity reliability and the dimensionality of scales [23,27]. So our study investigating the omegas and explained common variance(ECV) of the general factor in bifactor model. The wh of two bifactor models both with high values indicates greater reliability of these two bifactor model. That means the instrument’s sum score measures the target construct with perfect accuracy. The ECV values of general factors in two bifactor model indicates this instrument is multidimensional. Subscores for the multiple subscales could provide added value over simply reporting a total score. The values of omegas and ECV of general factor were good in all samples, especially for G-3 Model, which indicating the theoretical structure (three correlated factors model) of Chinese version of BIS-11 is good. 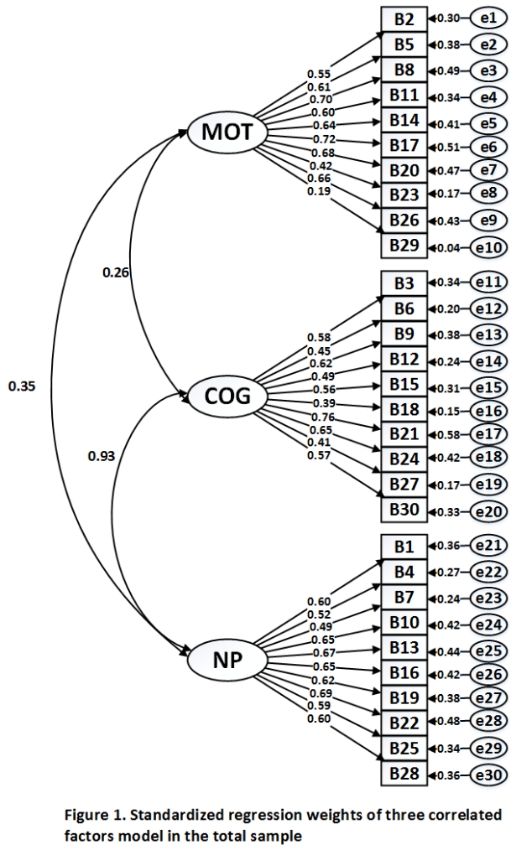 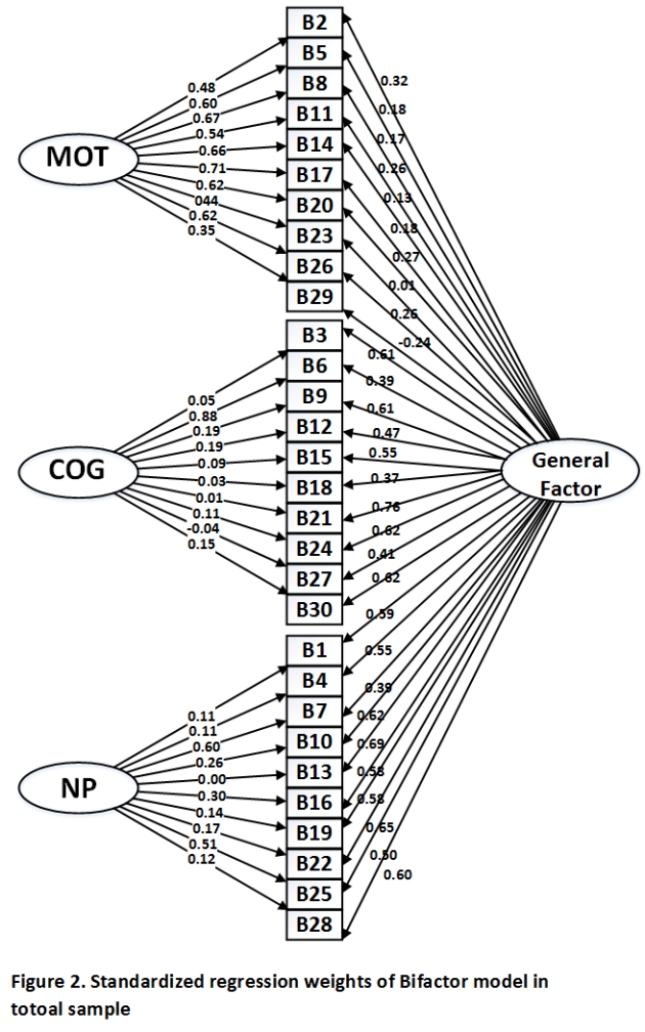