Potential Mechanism for the Elimination of Suicide Attempts by Modified Electroconvulsive Therapy in Drug-naive Patients with Suicidal Depressive Episode: A Pilot Study Report

# These authors contributed equally to the manuscript

Results: The VBM analysis revealed that MECT induced a GMV increase that was primarily localized to the left dorsolateral prefrontal cortex and bilateral thalamus. The FCDM analysis revealed that MECT induced an rs-gFCD decrease that was mainly localized in the left medial superior frontal gyrus and bilateral orbitofrontal cortex. No overlap existed between brain regions that exhibited structural and functional alterations.

Although MECT exhibits superior efficacy in the elimination of suicide attempts, the specific neural mechanisms responsible for this efficacy remain unclear. In recent decades, many studies have utilized multiple neuroimaging techniques to investigate the anti-depressive mechanisms of MECT. [7-10] Some previous studies reported that major depressive disorder patients with a history of suicide attempts had decreased fractional anisotropy(FA) in the left anterior limb of the internal capsule[11] and that MECT induced functional alterations in left dorsolateral prefrontal cortical, dorsal anterior cingulate (ACC), mediodorsal thalamus (mdTh), hippocampus, right anterior temporal, medial parietal, and posterior cingulate cortex in the depressed patients [10,12]. These findings suggested that depressive suicide attempts may be associated with some brain structural alterations and MECT may alleviate the depressive symptoms by inducing functional or structural alterations in some brain regions.

Here, we have conducted a pilot study to investigate the structural and functional alterations that occur subsequent to MECT at a time point at which suicide attempts are completely eliminated to explore the potential mechanisms by which ECT rapidly eliminates suicide attempts to provide basic information for a large-sample longitudinal study. Considering pivotal findings of previous studies, we hypothesized that the potential mechanisms by which MECT eliminates suicide attempts in patients with suicidal depressive episodes may be related to the structural and functional alterations in some key brain regions associated with the depressive symptoms, such as dorsolateral prefrontal cortex, thalamus, and other brain regions.

Gray matter volume (GMV) is a typical index for representing structural alterations of the brain in depression. GMV is routinely used as a structural biomarker in clinical applications in neuropsychiatric disorders.[13,14] Resting-state global functional connectivity density (rs-gFCD) is an index that reflects the connectivity of single voxels with other voxels in the whole brain and can be used to investigate functional alterations in the brain and as a biomarker for clinical applications in neuropsychiatric disorders.[15-18] Therefore, in this pilot study, armed with voxel-based morphometry (VBM) and functional connectivity density mapping (FCDM) methods, we investigated the GMV and rs-gFCD alterations that occurred subsequent to MECT treatment at the time point at which suicide attempts were completely eliminated. By this pilot study, we expected to find the specific structural and functional mechanisms of the effect of MECT on suicide attempts in the patients with suicidal depressive episodes.

All participants were enrolled from the second affiliated hospital of Tianjin Medical University between July 2014 and February 2015. Before the study began, ethical approval was obtained from the Institutional Review Board of Tianjin Medical University. After receiving full information about the study, the guardians of the patients provided written informed consent. All patients were diagnosed by 2 senior professional psychiatrists based on the DSM-IV diagnostic criteria for a major depressive episode. [19] The inclusion criteria were the following: 1) age ≥ 18 years old, 2) persistent suicide attempts exist at least 1 week, and 3) no history of the use of antidepressants, mood stabilizers and other neuroleptic drugs in the previous 4 weeks. The exclusion criteria were as follows: 1) neurological or neurodegenerative disorder, such as epilepsy, diagnosed by neurologist; 2) other mental disorders, such as current psychoactive substance abuse or dependence, schizophrenia, borderline personality disorder, etc.; 3) contraindications for MRI, including metal implants, claustrophobia, etc.; and 4) pregnant or breast-feeding female patients.

Demographical information, including age, sex, education and illness duration, were derived from the guardians’ and patients’ reports. The Scale for Suicidal Ideation (SSI) [20] was used to evaluate the severity of the suicide attempts, and the Montgomery-Asberg Depression Rating Scale(MADRS) [21] was used to evaluate the severity of the depressive episodes. These two clinical assessments were completed by an independent professional psychiatrist who was blinded to the diagnostic and treatment statuses of all participants. The first assessment occurred within two days prior to the first MECT treatment, and during the course of the MECT treatment, the MADRS and SSI assessments were conducted once weekly.

MECT was administered thrice weekly using a brief-pulse, constant-current apparatus (0.9A) and brief-pulse (0.5 ms, bilateral, BLMECT) device. Etomidate (0.3 mg/kg body mass) was intravenously used to induce anesthesia, intravenous succinylcholine (0.5-1 mg/kg body mass) was used to induce muscle paralysis, and appropriate oxygenation (100% oxygen, positive pressure) was used to ensure oxygen adequacy until the resumption of spontaneous respiration. At the initiation of treatment, individual seizure thresholds were detected via standard stimulus dosing methods, and subsequent treatments involved the delivery of stimuli at 2-fold the threshold stimulus to ensure the induction of seizures. The MECT treatment was ceased if the patient exhibited an adequate clinical response or failed to exhibit ideal improvement after the last two ECT sessions based on the clinical decisions of the psychiatrist. [5,6]

The resting-state fMRI data were preprocessed using SPM8 (http://www.fil.ion.ucl.ac.uk/spm). The first 10 volumes for each subject were discarded to allow the signal to reach equilibrium and for the participants to adapt to the scanning noise. The remaining volumes were corrected for the acquisition time delay between slices. Then, realignment was performed to correct the motion between time points. All subjects’ fMRI data were within the defined motion thresholds (i.e., translational and rotational motion parameters below 2 mm or 2°). We also calculated the frame-wise displacement (FD), which indexes the volume-to-volume changes in head position. Several nuisance covariates (six motion parameters, their first time derivations, and the average BOLD signals of the ventricular and white matter) were removed using multiple linear regression analysis. Recent studies have reported that the signal spike caused by head motion significantly contaminates the final resting-state fMRI results even after regressing out the linear motion parameters. Therefore, we further regressed out the spike volumes when the FD of the specific volume exceeded 0.5. The datasets were then band-pass filtered in a frequency range of 0.01 to 0.08 Hz. In the normalization step, the individual structural images were linearly co-registered with the mean functional image. The structural images were then nonlinearly co-registered to MNI space. Finally, each filtered functional volume was spatially normalized to MNI space using the co-registration parameters and resampled into 3mm cubic voxels.

The GMVs of each voxel were calculated using VBMas implemented in the VBM8 toolbox (http://dbm.neuro.uni-jena.de/vbm.html). The structural MR images weresegmented into gray matter (GM), white matter and cerebrospinal fluid using the standard segmentation model. After an initial affine registration of theGM concentration map into the Montreal Neurological Institute (MNI) space, the GM concentration images were nonlinearly warpedusing diffeomorphic anatomical registration through the exponentiated Lie algebra (DARTEL) technique, and the results were resampled to a voxel size of 1.5 mm ×1.5 mm ×1.5 mm. The relative GMV of each voxel was obtained by multiplying the GM concentration map by the non-linear determinants that were derived from the spatial normalization step. Finally, the GMV images were smoothed using a Gaussian kernel of 6 mm×6 mm× 6 mm full-width at half-maximum (FWHM). After spatial preprocessing, the smoothed GMV maps were used for statistical analyses.

The rs-gFCDvalue for each voxel was calculated using an in-house script that was written on the Linux platform according to the method described by Tomasi and Volkow[15-17]. Pearson’s linear correlations were used to evaluate the strengths of the functional connectivities between voxels. Two voxels with a correlation coefficient of R > 0.6 were considered significantly connected. This threshold has been proposed to be the optimal threshold for calculating rs-gFCD in a previous study.[15-17] The rs-gFCD calculations were restricted toa cerebral gray matter mask. The rs-gFCD at a given voxel x0 was computed as the total number of significantly functional connectionsk (x0) between x0 and all other voxels. This calculation was repeated for all x0 voxels in the brain. The grand mean scaling of the rs-gFCD was obtained by divided by the mean value of allbrain voxels to increase the normality of the distribution. Finally, the rs-gFCD maps were spatially smoothed using a 6 mm × 6 mm × 6 mm FWHM Gaussian kernel.

In the current pilot study, we recruited only 4 subjects for the collection of clinical MECT and MRI data (1 male, 3 female ), 2 subjects were the first major depressive episode patients, and 2 subjects were the repetitive major depressive patients. All the 4 subjects had none history of the use of antidepressants, mood stabilizers and other neuroleptic drugs in the last 4 weeks. The average age of these patients was 35.0 ± 4.8 years. The average MADRS was 38.0 ± 1.4, the average SSI severity score was 56.9 ± 9.0, and the average duration of existing persistent suicide attempts was 22.0 ± 27.5 days. In this pilot study, when the suicide attempts were completely eliminated, all of the patients had received 8.5 ± 2.0 treatments ( 6-11 treatments ). The post-MECT MADRS was 17.5 ± 9.4, and this result also confirmed the anti-depressive effect of MECT. 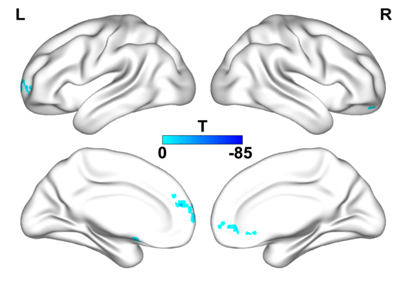 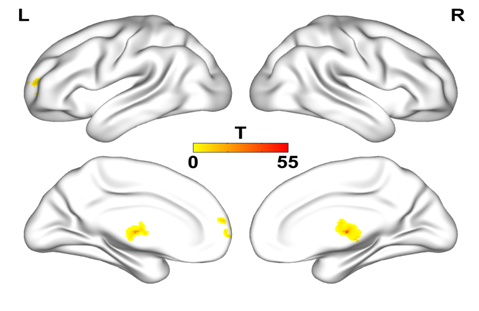 There are some limitations in our study. First, the patient sample size we analyzed is relatively small. Actually we enrolled 15 patients in total. Due to the influence of the disease, patients generally exhibited poor compliance, which subsequently resulted in the poor MRI data quality and only four patient's data can be used for analysis. Future studies should consider enrolling more patients to validate our findings. Second, the lack of a control group also is another limitation of the current study. Future studies could enroll the patients who receive antidepressants for suicide attempt treatment and compare the specificity of MECT treatment to drug treatment so that the mechanisms of MECT in the elimination of suicide attempts can be better characterized.

This work was supported by grants from China Postdoctoral Science Foundation (2012M0585).

There are no conflicts of interest.