Background: Brain glioma is a common primary intracranial tumor with unfavorable prognosis. MicroRNA-21 (miR-21) is a small RNA molecule involved in post-transcriptional modulation and is closely associated with cell growth and differentiation. Recent studies have shown that miR-21 expression affects tumor proliferation and growth via the PI3K/AKT signaling pathway. This study investigated the expression of miR-21 in glioma and its effects on the PI3K/AKT pathway and cell proliferation.

Methods: A total of 35 brain glioma patients were recruited from March 2013 to November 2014 at our hospital. In situ hybridization (ISH) and RT-PCR were used to detect the expression of miR-21 in both tumors and adjacent brain tissues. Human brain U251 glioma cells were transfected with anti-miR-21 to suppress miR-21 expression, followed by immunofluorescent assay of PI3K and AKT expression profiles. Flow cytometry was employed to detect the change between different stages of the cell cycle.

Conclusion: MiR-21 expression was found to be increased in brain glioma tissues, accompanied with ver-activation of PI3K/AKT signaling and proliferation of glioma cells.

Brain glioma is a common primary intracranial tumor with high malignancy [1]. Current research indicates that brain glioma is caused by a combination of genetic predisposing factors and oncogenic environmental factors [2]. Although a combined therapy of neurosurgery and chemo-, radio-, immuno- and molecular targeted therapy can significantly prolong patients’ life and improve their quality of life [3,4], brain glioma has a high recurrence rate and patients with brain glioma have poor prognosis due to its rapid progression, high heterogeneity, and diffuse infiltrative growth characteristics [5]. Therefore, a study of the pathogenesis and molecular biology of brain gliomas is critical for further improving treatment efficacy and extending patients’ survival.

MicroRNAs (miRNAs) are small, highly conserved, noncoding RNAs that regulate gene expression by binding to complementary sites on target transcripts and are important modulators of pathophysiology processes [6,7]. MicroRNA-21 (MiR-21) is involved in modulating multiple biological behaviors including cell growth, division and differentiation [8]. Interestingly, changed miR-21 levels have been found in various malignant tumors and linked to drug-resistance of tumor cells [9]. PI3K is best-characterized direct target of miR-21 [10]. A subsequent study found that the effects of miR-21 on tumor cells are mediated by modulating the PI3K/AKT signaling pathway [10]. Thus, the study investigated the expression of miR-21 in brain glioma cells and its correlation with PI3K/AKT signaling.

A total of 35 patients with brain glioma (20 males and 15 females, aged from 28 to 64 years, average age = 39.1 ± 6.5 years) were recruited for this study from December 2013 to December 2014 at our hospital. 14 brain tissues were collected from internal decompression after severe brain trauma (8 males, 6 females, aging between 31 and 67 years, average age = 42.3 ± 8.2 years) as the control group. All glioma patients had not received radio-/chemo-/immune-therapy before admission. The lesion was confirmed by head MRI.

Formalin fixed paraffin embedded (FFPE) tissues were sectioned at 4 µm for ISH assay. DIG (digoxigenin) labeled anti-sense miR-21 oligonucleotide probe (5’- TCAACATCAG-TCTGATAAGCTA -3’) was purchased from Boster (China) and used as the probe in the ISH assay as previously described [11]. Briefly, the FFPE sections were deparaffinized, rehydrated, and blocked for peroxidase activity, followed by proteinase K digestion and PBS (0.5M, pH 7.4) rinsing. Pre-hybridization was performed for 3~4 hours at 63°C~65°C, followed by the addition of hybridization buffer containing the probe for 12~16 hours at 65°C. After hybridization, 0.2XSSC solution was used to wash the sections. After blocking at room temperature, the sections were incubated with anti-rabbit DIG antibody for 1-hour at 37°C. After rinsing with PBS, alkaline phosphatase was added, followed by color development using alkaline phosphatase substrates. The reaction was quenched by PBS washing. The sections were fixed in 4% paraformaldehyde for 2 hours, followed by PBS rinsing and cover slice mounting. The sections were observed under a bright field microscope.

Anti-miR-21 and negative control nucleotide sequence with methylation modification were synthesized by Sangon (China) as listed in Table 1. Transfection was performed using Lipofectome INTERFERin transfection kit (Polyplus transfection). Log-phase grown brain glioma U251 cells (Cell Bank, Chinese Academy of Sciences)were detached with trypsin. The cells were counted, properly diluted and seeded into 96-well plates. After culturing for 24-hourse, cells were transfected with anti-miR-21 and negative control oligos respectively, using the lipofection method according to the instructions of the transfection kit [13].

FFPE sections were de-waxed and re-hydrated, followed by antigen retrieval and blocking in 0.5% bovine serum albumin. Sections were incubated with mouse anti-PI3K or anti-AKT antibody overnight at 4°C, followed by incubation with FITC fluorescent labeled goat anti-mouse antibody for 30 min at room temperature after washing. After adding anti-fade reagents, sections were covered with coverslips. Images were captured under a fluorescent microscope [14].

Flow cytometry was used to detect cell cycle stage. Transfected U251 cells were cultured to log-phase growth. Cells were harvested and centrifuged. After washing with 1 × PBS, cells were fixed in 90% ethanol at 4 °C overnight. After discarding ethanol, cells were incubated with RNase for 30-min at 37 °C, followed by staining with PI (propidium iodide). Cells were loaded onto the flow cytometer (Becton Dickinson) and sorted at 488nm excitation / 630 nm emission wavelength. Ten thousand fluorescent signals were collected to plot FL-2 area and DNA histogram by Modifit software. All experiments were replicated for three times, and presented as the percentage of cells at specific cycles [15].

SPSS 17.0 software was used to process all collected data, which were presented as mean ± standard deviation (SD). The comparison between groups- was performed by student t-test. Multiple group comparison was done by the analysis of variance (ANOVA), followed by q-test. A statistical significance was defined when p<0.05. 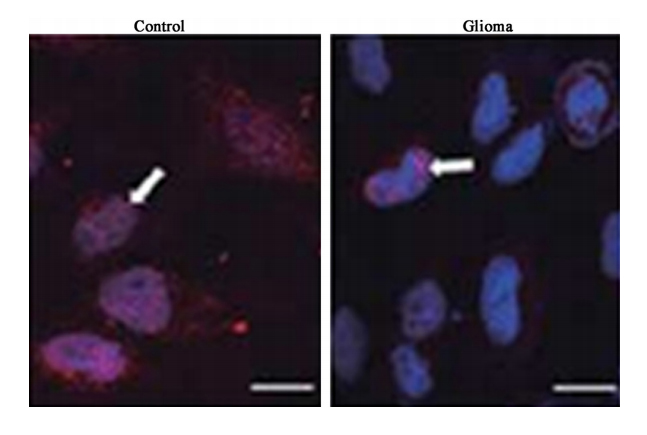 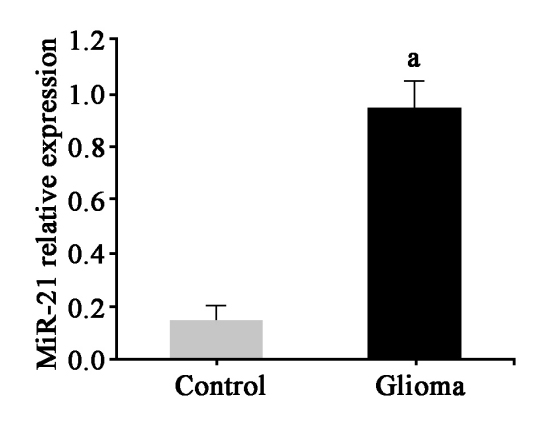 Fig. 2 miR-21 expression in glioma and normal brain tissues were detected by real-time PCR. a p<0.01 compared to control group.
MiR-21 Expression after Transfecting Anti-miR-21 in U251 Cells

We further used anti-miR-21 (an antisense oligo of matured miR-21) to transfect U251 brain glioma cells, followed by RT-PCR to quantify miR-21 expression. Using ck-siRNA as the control, we found the relative expression level of miR-21 was 0.61 ± 0.051, 0.93 ± 0.11 and 0.96 ± 0.12 for anti-miR-21 transfected cells, ck-siRNA control cells, and blank controls. The level of miR-21 in anti-miR-21 transfected cells was significantly lower than that in blank control and ck-siRNA control (p<0.05,Fig. 3) cells, suggesting the successfully silencing of miR-21 expression. 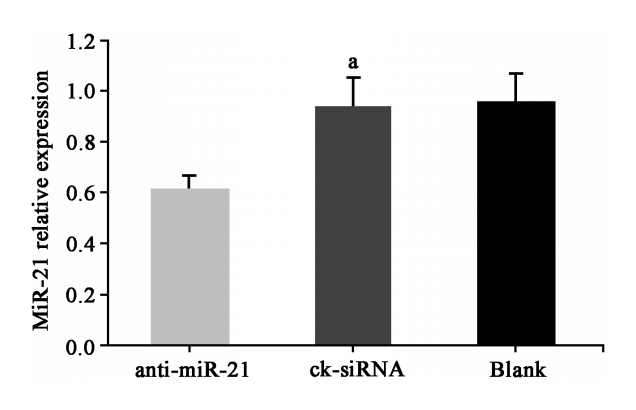 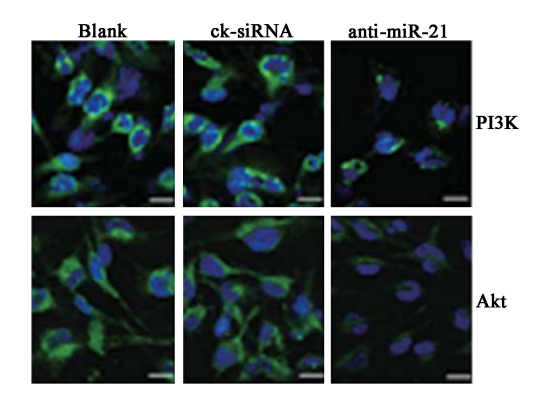 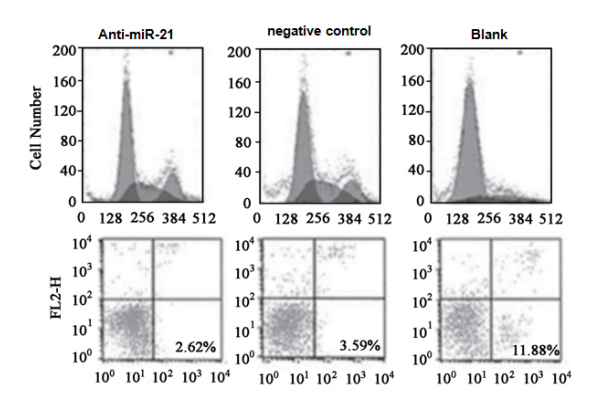 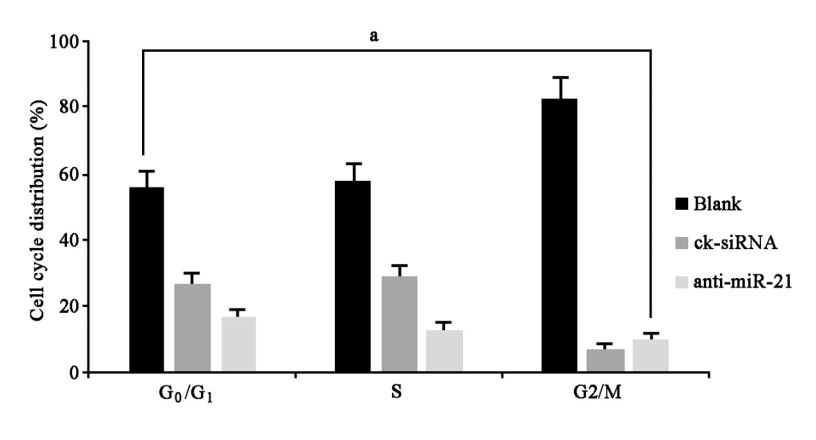 Brain glioma is a common primary intracranial tumor with unfavorable prognosis [16]. Recent studies have shown that miR-21 expression affects tumor proliferation [17]. In our study, the results of ISH analysis and RT-PCR revealed an elevated expression of miR-21 in tumor cells compared to normal brain tissues. Current research indicates that microRNA participate in the modulation of cell proliferation, growth, and differentiation [18]. This study demonstrated that inactivation of miR-21 expression significantly increased number of cells in the G0/G1 stage and lowered the number of cells in the S or G2/M stage, suggesting extended cell cycle length and impaired mitosis ability. Thus, miR-21 represents a potential therapeutic target for the treatment of brain glioma.

PI3k/AKT pathway not only plays an important role in regulating insulin sugar metabolism, but also promotes cell survival and apoptosis, and the deformation and movement of nerve cells [19-21]. In addition, PI3k/AKT pathway was reported to be regulated by PTEN protein in maintaining cell proliferation and division at normal levels [22]. Interestingly, PTEN was reported to be significantly inhibited by miR-21 through binding to the 3'-UTR of PTEN mRNA in the liver cancer cells [19, 23] Consistent with these observations, we found that inactivation of miR-21 through the anti-sense oligo of miR-21 significantly decreased PI3K and Akt expression in glioma cells. The results revealed that PI3k/AKT pathway can be regulated by miR-21 and the effects of miR-21 on glioma was involved in the regulating PI3k/AKT pathway.A previous study showed that silencing of microRNA-21 can increase radio-sensitivity in malignant glioma cell lines through inhibition of the PI3K/AKT pathway [24,25]. Our study therefore confirmed the role of miR-21 in glioma cell proliferation, and the effect on the glioma was involved in the regulating the PI3K/AKT pathway.

In summary, the present study revealed that miR-21 plays a vital role in brain glioma, and the effects of miR-21 on brain glioma are associated with the regulation of PI3K/AKT pathway. Further studies should be conducted to determine PTEN expression in U251 cells after miR-21 silencing and the relationship between PTEN expression and other cell regulatory factors, in order to provide more evidence for clinical studies. The miR-21/ PI3K/AKT pathway may represent an attractive pharmacological target for the treatment of brain glioma.